First and foremost, I want to give my deepest and sincerest condolences to Robin Williams’ family and friends and all who knew him.

I never, ever thought I’d be writing something like this. I don’t feel qualified to write this. After all, I never met Robin Williams. I’m not a comedian, or a professional writer or performer (yet). Who am I to write about a genius––– and I do not use that term lightly––– like Robin Williams? Furthermore, who am I to feel like I lost someone when I heard that he left us far too soon?

I won’t go into detail, but for the sake of context, I will say that, although I have never suffered from depression, for many years, my life was… not so great. During this time, I also had very few people I could turn to to confide in about any of it, much less all of it. Everything in my life appeared to be getting increasingly worse. Again, I was not suffering from depression, but I was finding myself more and more resigned to what I was starting to believe was simply my lot in life.

I knew I couldn’t live like that, so I searched, scrounged, and hunted for anything that could raise my spirits. Whatever I found, I held near and dear to my heart. One such “discovery” was Robin Williams. I knew who he was, of course, but this was when I truly realized just how gifted he was. From his stand-up to his dramatic roles, Robin Williams was a constant source of humor, joy, inspiration, and hope for me, and, I’m sure, for countless others, as he will continue to be forever.

One of the best birthday presents I have ever received was a group of tickets for my parents and I to see Robin Williams’ stand-up show in Normal, Illinois, as part of his “Weapons of Self Destruction” tour. The show wasn’t until months later, but this gave me time to not only look forward to the unforgettable night, but to watch as much of his work as I could get my hands on.

Finally, the day came: Saturday, November 14, 2009. I was proud to find myself as the youngest person in the audience: the only one under eighteen! It was truly an incredible experience: I laughed constantly, absorbing every word, every quip. After his regular routine, Robin Williams came back out onstage for some “localized” humor. He commented on everything from Chicago’s infamously crazy and unpredictable weather––– suggesting meteorologists simply spin a giant wheel of temperatures to determine their forecasts (“73! That sounds like a good number!”)––– to the fact that he was in Normal, Illinois.

“Who’d ever thought I’d be in a place called Normal?!” he asked with that comedic honesty. “It’s a sign of the apocalypse! Everybody run! AAAAAAHHHHHH!” … and he proceeded to run across the stage while uttering a high-pitched scream.

Well, Mr. Williams, Normal, Illinois was certainly anything but “normal” the night you graced it with your presence and truly unique and gifted comedy. My life was never anywhere close to “normal” again after I fully discovered your talent. And for that, I am eternally grateful to you, Mr. Williams.

After all, who wants to be “normal,” anyway? 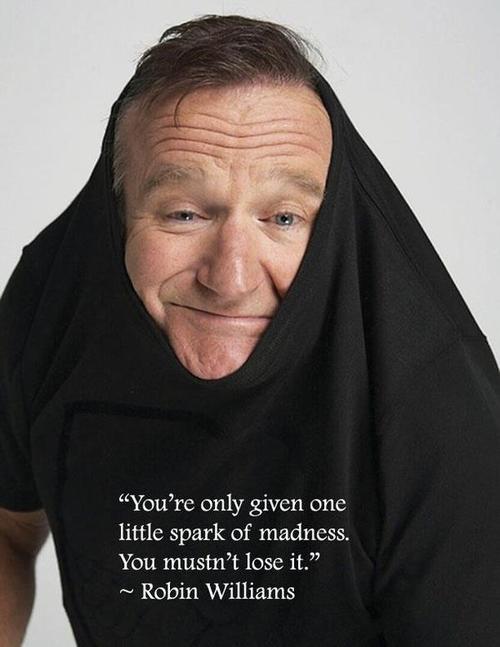