Before I dive into this post, I’m proud to announce that this will be my very first post that includes a picture!

Remember how I wrote last week that some Jammers may think it was too early to break out the Halloween music?

Well, I don’t know if you’ve noticed, but times have changed. Specifically, from September to October.

But, despite this, I also realize that some Jammers may need a little help getting into the spirit (pun intended). Well, I’m here to help!

One tradition we have in my family, which I have continued to uphold on my own, is watching “Halloween” movies and television specials throughout October. (I put “Halloween” in quotes because many of them are not explicitly Halloween-related, but are horror or horror comedy films that remind us of Halloween anyway.)

In light of this, in this week’s jam session, we’ll opening up the crypt to unleash…

As I stated at the end of last week’s jam session, I have a wide variety of Halloween songs in my music arsenal. This is one of those cases in which the music I already have, not to mention the music I’ll probably find later and the possible requests from my fellow Jammers, far exceeds the single hour a week we have to jam together. Rather than risk leaving something out, I’ve decided to divide this theme into a few “sub-themes,” which will change each week leading up to Halloween.

This week, obviously, this sub-theme will revolve around the many films that help put us in the mood for monsters and give us a hankering for horror (and/or horror comedy)!

So far, this week’s “Spooky Songs from the Screen” come courtesy of artists such as Svengoolie (Svengoolie.com) and Elvira, Mistress of the Dark (Elvira.com). Certain selections come from films such as The Blob (1958), Hocus Pocus (1993), and The Rocky Horror Picture Show (1975), and I’m sure you can imagine which TV shows will be featured. (If you can’t, then jam with us and find out!) Of course, that’s just a small portion of what’s in store for you when we jam together again this Saturday!

… Did I forget anything? Oh yeah, a picture! Here you go: 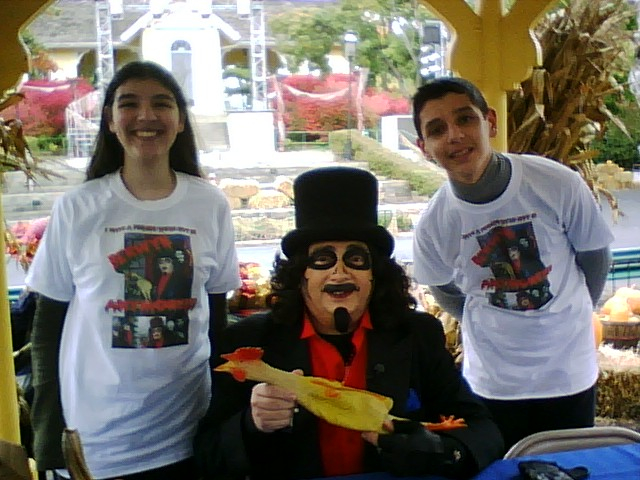 This was taken at Six Flags Fright Fest: the very first time I ever met Svengoolie!